Dangers on the roads

We’ve been experiencing the rainy season here over the last six weeks.  Almost every day the clouds have rolled down from the Uluguru Mountains and dropped their load on Morogoro.  Now we know why the roadside gutters – a hazard for many a driver - are so deep: to cope with the torrents of rain that pour down from the mountains.  A few weeks ago it rained solidly for 40 hours, causing havoc across eastern Tanzania.   Several people died, there was much flooding and chaos on the roads as bridges were swept away.  The homes of many people were destroyed and crops washed away. 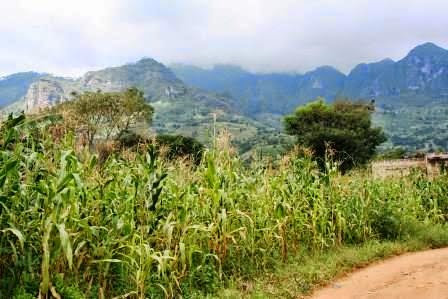 And yet the rain is welcome.  The temperatures have dropped and now scarcely reach 30 degrees C (!) during the day, and at night we’ve even been able to sleep without a fan.  Everywhere you look people are cultivating.  Every scrap of land seems to have something growing on it, even the roadside verges.   Morogoro is well known as a centre of agriculture in Tanzania – the town even has a University of Agriculture.  People are busy in their “shambas” every day, and what they don’t use for themselves they sell, bringing in much-needed income.  We’ve recently met a man called Saif who works as a security guard Monday-Thursday for a Christian household, and on Fridays he cycles down from his home higher up the mountain with a basket of fruit and vegetables that he sells from gate to gate.  So I know that every week I will be able to buy freshly picked carrots, spring onions, peppers, leeks, radishes, coriander, lettuce, broccoli, even strawberries.  I love Fridays!  On the other hand, we've realised that fresh food here doesn’t last as long as it does in the UK – no preservatives added!  So instead of buying enough for two or three days, now I buy extra and freeze it all.

When I (Ruth) was writing this update in the last week of May I was anticipating that I would be telling you all about the pastors’ seminar in Babati that was to be held from 27th-29th May.  However, unexpected events meant that the seminar was cancelled (see below).  It was to have been the first time that Steve preached in Swahili – a real milestone for him.  Since the seminar in March (see last month’s blog) Steve has been painstakingly translating the three talks he did then into Swahili, with the help of his language teacher.  Many hours went into the work of translating, refining and practising the pronunciation.  Even though the conference was cancelled it has been a really useful exercise.  Steve will use these talks at the rescheduled conference later in June. 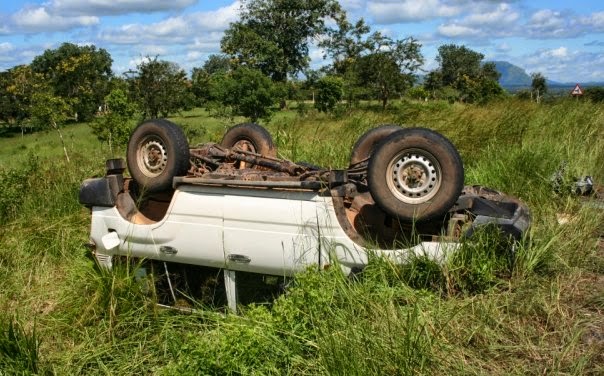 On 25th May we received a very sombre reminder of the dangers of travelling on Tanzanian roads. Our team mate and friend Tony Swanson was involved in a head-on collision with another car, which unexpectedly pulled out from behind a lorry to overtake it, heading straight into Tony’s path.  In a split second, in spite of swerving, Tony’s car was hit, rolled and ended upside down in a ditch.  Thankfully Tony managed to escape with 'only' a couple of fractures in his foot, bruising and grazes.  The other car burst into flames and sadly two of the five occupants died. We understand that the driver was a policeman and that he had been drinking. 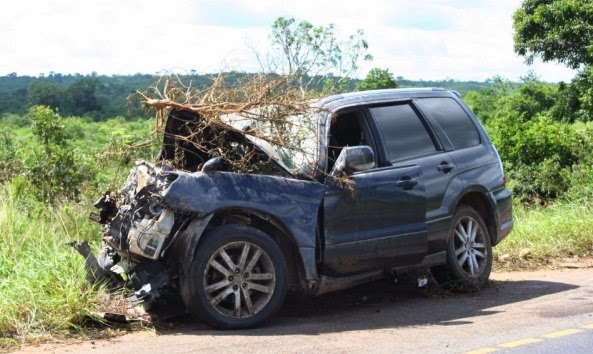 There are so many reasons to be thankful to God.  Tony’s car (now written off) was a Toyota Landcruiser – a sturdy beast of a car, ideal for Tanzania’s many unmade roads.  No doubt this was partly why Tony survived without more serious injuries.  (The other car was a Suburu like ours – a chilling thought for us.)  Almost immediately after the accident another car passed the scene and the driver, Daniel, 'happened' to be a member of our church!  He saw Tony and stopped to help.   It was he who called Rev Falanta (Chair of the Institute of 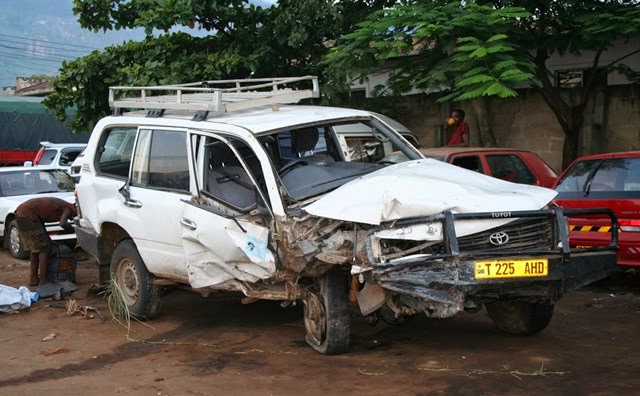 Bible & Ministry) who then called Steve. Steve and Falanta drove to the scene of the accident and brought a rather dazed and shocked Tony back to Morogoro. The AICT has rallied around Tony.  At the hospital where Tony went to have an X-ray on his foot, the pastor, his wife and several members of his congregation came to show support and assist in dealing with the hospital.  Praise God that it wasn’t left to me and my meagre Swahili!  In the meantime Rev Falanta and Steve returned to the scene of the crash to deal with the police, and organise a crane to retrieve Tony’s car which is now sitting in a garage in Morogoro.

One of the cultural attitudes that we struggle to accept here is how people drive.  We see the results of many accidents on the road – usually lorries in ditches, sometimes coaches.  There is a fatalistic attitude to life – “If it’s my day to die, then I will die” – with no apparent understanding that many accidents could be avoided and lives saved.  It’s also true that a lack of vehicle maintenance contributes to accidents, but, from what we’ve observed on the roads, bad driving and a “don’t care” attitude are the main causes.

What is also shocking to us is how onlookers behave at accidents.  Rather than help the victims, they see it as an opportunity to help themselves.  Daniel very kindly guarded Tony’s car until Steve was able to crawl inside and retrieve Tony’s possessions.  He wasn’t able to remove Tony’s car radio - but somebody else did overnight.  Sadly Daniel had his phone stolen from his car while he was helping Tony.  The other car, wrecked and burning as it was, had its spare tyre stolen!  What a mad world we live in.

We are so thankful to God that Tony escaped with his life.  Amazingly this was his first serious accident in the 15 years he’s been in Tanzania. 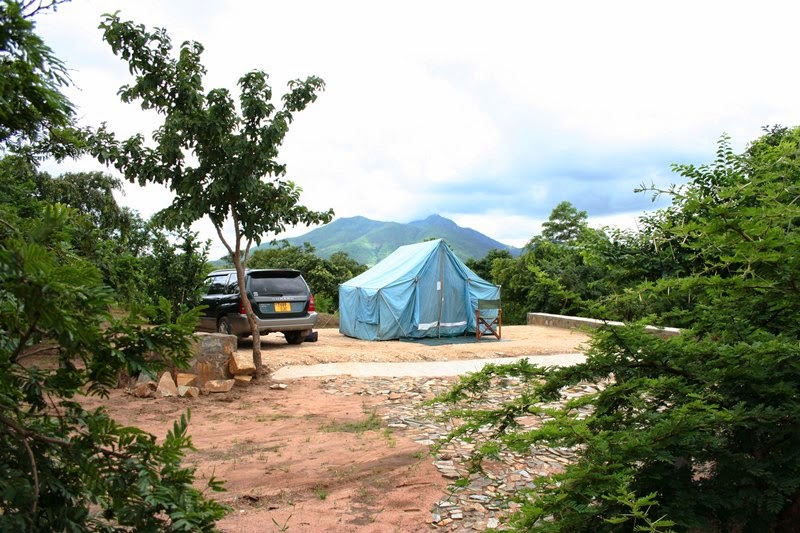 Better news is that the project at Sanga Sanga is progressing steadily.  In May the campsite was opened and we are ready to welcome overland travellers who are passing through Morogoro.  The retreat house already has several bookings from various groups.  Thus we hope the Retreat Centre will begin to be self-sustaining.

We are gradually settling into a routine of language and work.  Steve has preached several times recently and I’ve been working on publicising the Retreat Centre, updating the website, doing the accounts and other admin tasks.  Tony has asked me to teach English to the staff at Sanga Sanga, which I’m looking forward to doing although I’ve never taught complete beginners before.  Still, I’m up for a challenge!

As always, we thank you for your support and prayers.  Your prayers for “travelling mercies” mean so much to us.  Listed below are our dates for June.  We’ve been invited to attend AIM’s Leadership Conference in Nairobi and are looking forward to hearing our pastor from Corsham Baptist, Eddie Larkman, as he gives the Bible teaching.

- Please pray for a speedy recovery for Tony and that there will be no legal implications arising from the accident (it has to go to court because there were fatalities).  The police have apportioned no blame to Tony for the accident.  Tony's left foot/leg is now in plaster.

- Pray for safe travels this month as we go to Nairobi – by car and plane, and that we would benefit from AIM's Leadership Conference.

- Please pray for Ruth’s check-up at hospital, that the various tests will have good outcomes.

- Pray that the Islamics course at Sanga Sanga will be of great benefit to pastors and evangelists and help them to understand and relate to their Muslim neighbours.  Tanzania's population is around 40% Muslim.

Random photo of the month:

Posted by Steve and Ruth Lancaster at 12:37 No comments:

Steve's Hotmail account has been blocked for the last 10 days or so.  If you have emailed him and are surprised at not receiving a reply, that's the reason.  We are doing our best to get it re-opened.  In the meantime, please contact Steve on his new hotmail address: stevelancs69@hotmail.com.

P.S.  If you normally receive an email from Steve notifying you of our latest newsletter, please drop him a line at the above email address.  Sadly, the blocked account means he doesn't have access to his contact list.

Thanks!
Posted by Steve and Ruth Lancaster at 15:23 2 comments: