Two years ago this month we were making final preparations for leaving the UK and starting our first term in Tanzania with AIM. We scratched our heads over what to take and what to leave behind.  Many miles were travelled up and down the M5/M6 as we packed up our house and took our things to be stored in the garage at Steve’s parents’ house.  We said our goodbyes to family and friends.  We were blessed with a wonderful commissioning service in our church, and then we were off!  11th July marks our two year anniversary!

In the great scheme of things, 2 years is not a long time.  And yet, as we look back at them, we can truly say we feel settled here in Morogoro.  We are pressing on (some might say plodding on!) with learning language and culture, and we are both busy in the roles we came here to do.  We give thanks to God for helping us so far, for the way He’s helped us to adjust, to learn and to settle. There have been ‘blips’ along the way, but we can say with Isaiah, “Lord, you establish peace for us; all that we have accomplished You have done for us.” (Is. 26:12).

Pastors’ Conferences
The two recent conferences at Moshi and in Dar for pastors and evangelists went very well.  Both were well attended, and the topic being taught, the Holy Spirit, generated much lively discussion.  Steve taught eight sessions, mainly in Swahili, at each conference, although language fatigue saw him revert to English for one or two of them!  He says, “There were times when my language energy levels felt depleted, but there were also times when I felt an extra sense of fluency - and not just in the session on speaking in tongues! There were times, especially in those dreaded afternoon sessions, when a number of heads were drooping - but there were also times when I could sense that people were switched on and hungry to learn.  There were times when people requested discussion times to be extended, and times when the unaccompanied singing of the pastors filled the room and thrilled the heart!  There were times when I wondered whether it was all worth it - and times when I felt that what I was doing had eternal significance. And there was a time after one particular session, when a pastor’s wife approached me with bag in hand, only to ask me whether I wanted to buy some pants and socks!!” 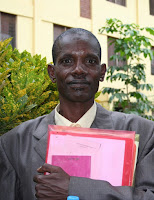 Photos from the conferences: l-r: Steve with Pastor Matinya, Pastor Yatoshta, and the kitchen at the Dar conference!

This month we will be making the longest journey we’ve done so far in Tanzania, down to Mtwara for a pastors’ seminar.  Mtwara (twinned with Redditch, by the way!) is in the far south of Tanzania—next stop Mozambique!  It will take us almost 2 days of travel to get there.  We understand that the road to the south is tarmacked and fairly good.  This seminar, although it won’t have as high numbers as the previous two, will provide encouragement to the pastors and evangelists who otherwise might feel cut off from the rest of the Diocese.  Then, in August, we travel to Ifaraka (a mere 5 hours away!) for a pastors' conference there. 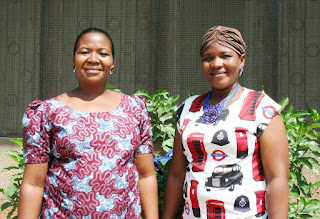 Following the conference in Dar in June we travelled to Nairobi for Ruth’s annual medical check-up.  A raft of blood tests relating to the original DVT revealed nothing untoward, although Ruth was advised to wear a compression stocking when sitting or standing for long periods, not just for travelling.  You can imagine her delight to receive this advice!  But we are thankful for good progress and another year’s supply of medication!

Our trip to Nairobi coincided with that of various members of AIM’s International Office and also a friend of Ruth’s from Tearfund and Oak Hall days who was en-route home from Rwanda.  We had a good time catching up with folks and managed to fit in a visit to the Eastern Region office to join them in their daily prayer/chai time.  We attended the morning service at Nairobi Baptist and found that the preacher was, until recently, a member of St. Nicholas, Sevenoaks, the very church where we were married and that Ruth’s friend attends!  What a small world!

Back in Morogoro, work at Sanga Sanga continues.  We’ve had various groups making use of the Retreat House, and Matt Dixon has been stockpiling materials and finalising plans for the construction of the conference hall.  We are delighted to report that the ground has been broken and that digging has commenced!  Please pray that this work will proceed on schedule, on budget and without too many problems.

Visitors!
We’re looking forward to a visit from the UK of Ruth’s (twin) sister Rachel and Ian, her husband.  This will be their first foray into Africa and we hope to be able to show them something of what we do, a slice of real life in Tanzania, as well as having a few days of tourist Africa on safari and visiting Zanzibar.  It will be interesting to see their reactions...

Thank you, as always, for your interest, prayers and support.

• Praise God for His help and guidance over 2 years in Tanzania.
• Praise God for good results from Ruth’s check-up.
• Pray that the construction work at Sanga Sanga will proceed well.
• Pray for safety as we travel to conferences.
• Pray for the pastors’ seminars in Mtwara and Ifakara.
• Pray for good times with family and friends as they visit.

Random Photos of the Month: 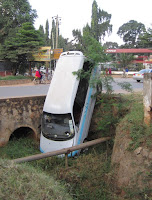 Whoops!  Should have gone to Specsavers! 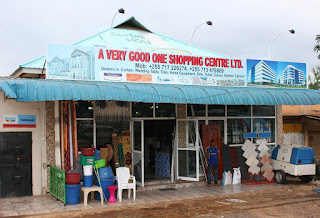 Posted by Steve and Ruth Lancaster at 21:01 No comments: