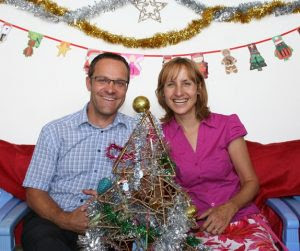 As I sat in a well-worn barber’s chair on Saturday morning, my mind began to drift towards our UK Christmas visit. As the scissors and the clippers did their work, it gave me time to ponder on how very different my surroundings would be in just a week’s time. They won’t be singing “snow had fallen, snow on snow” here in Morogoro and there’s no chance of “frosty winds making moan”, just warm and wet winds sweeping off the Uluguru mountains behind us. There won’t be any jingling of bells or the twinkling of fairy lights and, whilst there will be plenty of open fires, there won’t be any chestnuts being roasted – just rice, beans, maize, ugali and possibly some chicken. And as you walk around Morogoro you have to look very hard to find a tinselled tree or a laughing Santa – thankfully!

Christmas is indeed coming but there’s a very different feel to it here, where Christians remember the birth of Christ but in a ‘business as usual’ sort of way. The church services do get a bit longer and, quite possibly, a bit noisier! The AIC church here will be having services on three consecutive days, each one lasting for about three hours. Spare a thought for our team leader Tony Swanson who is preaching at all three and is very much looking forward to watching the choir dancing their way through ‘Hark the herald angels sing’! There might also be a few candlelight services happening on Christmas eve but that’s probably more to do with a regular power cut than wanting to create a cosy stable-like feel (?!) in the service! 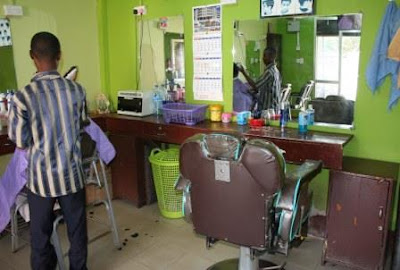 By the way, talking of power cuts, what does my Tanzanian/Indian barber do in his psychedelic green shop when the power goes off? He cranks up a noisy generator and carries on with the job, which by this point is very nearly done. Out comes a razor for the finishing touch and out comes a rather large brush (the type that goes with a regular dustpan and brush!) to sweep away the cuttings from my head and shoulders. Finally a dab of un-manly fragrant talc is applied to the neck and the job is done. And all for just £2!

Back to the Christmas musings! Whilst there are many differences between Christmas in Tanzania and the UK, the real focus is still the same – it’s a ‘holyday’ to remember the birth of Christ. It’s a time to reflect on an occasion when God began to put his plan of salvation into action; a time when God chose to ‘put on skin’ and come to live on this earth as a human; a time when he chose to use a young peasant girl to bring into the world the Son of the Almighty God, who somehow was also there when the world began! What an outrageous story! And all for the benefit of humanity! Amidst the froth of Christmas let’s find the time to ponder afresh the astounding truths of what it meant for God to become man. And then let’s pour out our hearts in gratitude by giving our lives in service to Him. “What can I give Him, poor as I am? If I were a Shepherd I would bring a lamb. If I were a wise Man I would do my part. Yet what I can I give Him, I give my heart.”

A Tale of Two Churches
The IBM conference season has now finished for the year; Ruth is working on the year-end reports and I’m beginning to ponder the subject for next year’s teaching. We’re thankful to God that the conferences this year have all gone to plan, and that the subject of godly leadership seems to have had an impact.

Bearing in mind Ruth’s comment about statistics in our last update, I’ll refrain from going into detail about miles travelled, litres of fuel consumed (by the car!), sermons preached, and the number of times I’ve been stopped by the police! Suffice to say, whilst it’s been a busy year, it’s been a good one, and we’re finishing the year with a sense of satisfaction at what God has done through us as a team. I’ll round up the year by giving you a glimpse of what life can be like on the preaching road here in Tanzania, in the form of a few diary entries. 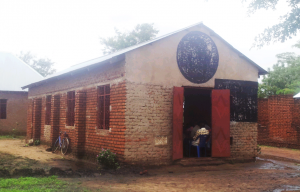 AIC Dumila: This was a long and painful day! Left home at 8am, and drove 75 kms to the church. On arrival I was given a dried chapatti and some tea; in hindsight, a mistake! Before I got up to preach, I had to visit the cob-webbed toilet shed three times, although it did give me the opportunity to escape the distorted noise of the generator-powered sound system for a few minutes! When the time came to preach, I then had to battle against the sound of an Islamic wedding party happening nearby. The hypnotic trance-like music seemed to have an effect on the congregation – or was that my preaching!? 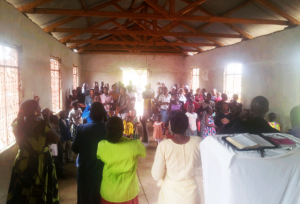 There were about 70 people crammed into this small mud-brick church. The notices lasted 20 mins, and there were three collections; one of them a general one, another for some building work, and the other for the choir! For the last one, the guy on the microphone was on hand to call out the amount that each person put into the basket! Meanwhile, sitting rather awkwardly at the front of the church and being able to see through the hole in the wall where a window should have been, I tried to keep a close eye on my car which was in danger of being swamped by Sunday School children! They found it amusing to look at their reflections in the mirrors and to run their hands down the not-so-glistening paintwork! Once the service was finished, I sold 15 Bibles at a knock-down price and was later given a lunch of rice and beans. I finally arrived home at 5:30pm with a pounding headache and the need for a paracetamol! 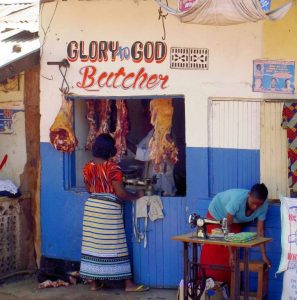 AIC Kinzudi Dar: Due to the fact this church was off the beaten track, I had asked the pastor to meet me at the main road. On the way to the church he asked me to stop at the butchers so that he could buy lunch! With a quick glance towards the hanging lumps of meat in the shop window, I assured him that my favourite meal was indeed rice and beans, and that he needn’t go to the expense of buying meat just for me! Off we drove with me inwardly cheering! As we approached the church the track got rather more ‘off-road’ and somehow I managed to arrive without ripping the sump from the bottom of the car! Yet again, mine was the only car outside the church; there were a few bicycles but the other 40 people had walked there. We started 25 minutes late and people continued to arrive as the service progressed. In a number of churches I’ve even seen people arrive with five mins of the sermon to go!

What a pleasant surprise! There were no microphones or speakers to shake the internal organs, which meant that I wouldn’t need the wax earplugs that I’d put in my pocket! There was only one collection, one song from a four-woman choir, and lots of congregational singing, much of which I couldn’t really understand, but nevertheless it proved to be a tonic to the soul! The tin-roofed church provided oven-like conditions in the humid heat of Dar, and I noticed that the pastor’s shirt was somewhat damp with only a few minutes gone! I’ve learnt that when preaching in Tanzania, it’s always wise to carry a flannel with you, and indeed, it proved useful as the service went on! I preached from John 13 - the section where Jesus washed the feet of his disciples just hours before the cross. We’re urged to stoop and serve as Jesus did, and that includes ‘washing the feet’ of those we don’t get on with, and those who may have wronged us in the past. I don’t recall reading that Jesus refused to wash the feet of the man who was planning to betray him - such a challenge to us all. As the service drew to a close, we filed out whilst singing the closing song and stood in a long line having shaken each other’s hands. And then……time for some more rice and beans! 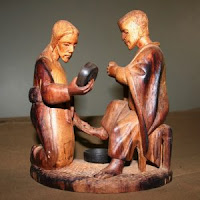 Further ahead: I’ll be leading another Oak Hall Israel trip from 30th Mar–9th April and it would be great to have some familiar faces on the trip! If you’re interested in seeing the sights of Israel & Palestine with your Bibles open, please see this link for further details: http://www.oakhall.co.uk/israel/israel.

In our last update Ruth reported on Oak Hall’s first Tanzania trip which took place back in August. Well, there’s another trip planned for next year (18 Aug-1 Sep), so if you want an idea of what the trip looks like, or maybe even fancy the idea of staying at Sanga yourself, have a look at the online brochure: http://www.oakhall.co.uk/summer/tanzania.

We wish you every blessing for Christmas and the New Year. 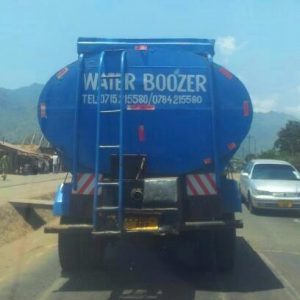 Posted by Steve and Ruth Lancaster at 18:52 No comments: