You may remember that our last blog update came at the end of March from the third floor of a hotel in Dar during our 15 day quarantine period.  Well, we survived our enforced captivity and were proudly presented with ‘corona-free’ certificates on our release, along with our confiscated passports!  That same morning the Tanzanian government decided to remove the hotel option for incoming passengers for quarantine due to the fact that a number of disgruntled lock-downers had escaped their hotels!  Instead, all incomers were being whisked off to some dingy university halls…. complete with shared bathrooms!  Not so ideal when you’re meant to be isolating!  It made us realise that our enforced hotel stay could have been so much worse!  To be honest, even though we were confined to one room, we actually enjoyed our stay there, although what did help was being able to escape into the corridor every night for some speed-walking exercise!  I (Steve) managed to clock up 30 miles over 14 nights – much to the amusement of the policeman posted at the end of the corridor!
So, what has the situation been like in Tanzania during these past few months?  In short, there has been no lockdown, much to the annoyance of the surrounding countries!  From the outset the President decided that serious lockdown would be too costly on the fragile economy of the country.  Schools, colleges and public gatherings were banned – but he did insist that the ban should not include gathering in church on a Sunday morning!  In fact he encouraged people to attend to pray against the virus – and just last week announced to worshippers in Dodoma that “the corona disease has been eliminated (from the country) thanks to God.”  We’re a tad sceptical about the elimination part of that sentence, although we’re very thankful to God that the virus does not seem to have caused the devastation that was feared.  It’s hard to know the real facts because data on the number of virus cases stopped being published on 29th April, at which point there were only 21 official deaths recorded.  Last month there were all sorts of rumours swirling around - of night-time burials in Dar, hospitals being overwhelmed, unreliable testing, and plane-loads of herbal remedies being flown in from Madagascar etc!
Social Distancing – what’s that?! 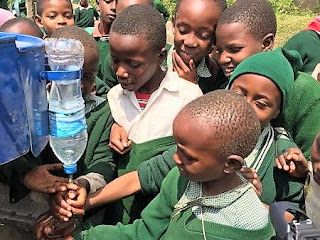 Today, the main streets of Morogoro are as busy as ever, and it’s very much business as usual.  It’s all hustle & bustle and there’s certainly little sign of social distancing!  Was there ever going to be in Africa?!  The traders continue to lay out their wares on the dusty pavements; the knife sharpener continues to sharpen machetes on his upturned bike; beggars continue to ask for a few shillings; the coffin-makers (situated near the hospital!) continue to bang up their coffins at the normal rate of production; the guy selling fresh coconuts from the back of his rickety old pushbike continues to peddle (and pedal!) for his living!   The only sign of a pandemic is that a few people are still wearing face masks, and outside every shop there is a variety of handwashing contraptions, some of which work better than others! 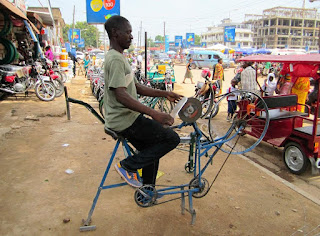 It seems a world away from what has happened elsewhere across the globe and the expected disaster appears not to have happened, and God willing it won’t.  In fact the WHO is now saying that there has been a slower rate of infection in Africa with lower mortality rates than elsewhere in the world.  One possible explanation is that Africa has a young population which has benefited from the control of diseases such as HIV and tuberculosis which has in turn reduced the vulnerabilities.  The experts are now saying that, whilst coronavirus likely won’t spread as fast in Africa, it may well linger on in transmission hotspots for some time.  The following link is a recent BBC article on the how the country (and president!) has handled Covid-19: https://www.bbc.com/news/world-africa-52983563
Sanga & Seminars: Due to the ‘gatherings ban’ (April-May) life at IBM’s HQ has been rather quiet.  Kids camps and churches cancelled their bookings at Sanga, and this meant that income was virtually non-existent.  As a result we had to reduce the hours of our workers but thankfully haven’t had to lay anyone off. There’s no such thing as ‘furlough support’ here in Tanzania, and we’re very grateful to a number of IBM supporters who donated to the cause and enabled us to continue paying salaries.  With these donations we were also able to buy sacks of maize flour to support the families of our workers during these leaner times.  It is hoped, now that the ‘gathering ban’ has been lifted, that bookings will be re-booked and life at Sanga will return to some sort of normality!  Two incidents reported in the last few days remind us that life at Sanga is often not normal: reports of a neighbouring bush fire meant that our workers were on high alert to prevent it spreading onto our property; and just yesterday a few of our workers tried to harvest honey from our bee hives…. without a great deal of success!  People ended up running in all directions as the bees swarmed and vented their fury on whoever got in their path.  Our building maintenance guy, who was down a well at the time, didn’t even escape the stinging!
Our first scheduled IBM regional seminar of the year had to be postponed back in early June.  We’re hoping that the next one on the list will happen in July in Mtwara, way down in the south of the country. With an extended preparation time this year, all of the teaching material has now been prepared and is ready to print – all 64 pages of it, with a Swahili word count of 35,000 words!  The pastors and evangelists who attend will be given a full set of notes for two reasons: firstly, they can then use the material in their churches, and secondly, having my notes means they’re able to make sense of my Swahili pronunciation!  In terms of the English word count, the notes are 6,000 words longer due to fact that one word in written Swahili often comprises 3-5 English words!  Everything is thrown together: tense, pronoun, verb etc!  Let me give you a couple of examples so that you can marvel at the language that is Swahili!  These five words - “he did not concern himself” become one word in Swahili – “Hakujishugulisha”.  If I were to say to you “Let us humble ourselves”, I’d say this word: “Tujinyenyekeze”.  And finally the words “When it is preached” become “Itakapohubiriwa”.  You can understand why my teaching notes contain a lot of pen marks in an attempt to break up such words to make them easier to say!
IBM seminar dates:

This year I’ll be preaching through the gospel of Mark, although with only eleven teaching sessions, we’ll only be scratching the surface.  There is no particular theme or agenda, no strategies or ‘how to do….’ methods, just good old-fashioned preaching from God’s Word!  In studying Mark’s gospel I’m inspired by the fact that the writer was, in his early days, quite possibly a failed missionary whose best friend was our favourite disciple, Peter – who was also known for his slip-ups and failures!  I’m encouraged by the fact that these two ‘failures’ were used mightily by God in the early church and beyond.  It’s thought that Mark used much of Peter’s preaching material and shaped it into the gospel that we have today.  Little did they know what an impact this material would have down through the ages.  Praise God that he chooses to use ordinary bods like Mark and Peter, with their foibles and faults, in the growth of His kingdom!  Whilst I’m certainly not expecting my teaching to have as much impact, I am hoping and praying that God would use my material on Mark’s gospel to inspire, strengthen and deepen the faith of all the AICT men and women we work with.
These last two months have continued to be busy ones for Ruth.  Whilst her monthly ladies prayer breakfast and fortnightly Book Club have been temporarily suspended, there has been plenty to do at Sanga Sanga.  The audit of the books in March has led to implementing some new and improved processes, the finance manual has been updated, a new bank account opened (a long-winded process here!) and various reports written for the Diocese.  There are always personnel issues to deal with and the usual administration and maintenance that goes with running a conference and retreat centre, even without guests!
One of Ruth’s goals for this term was to find a good person to employ as an Accountant.  Praise God that we have been able to appoint a young man who is a believer and seems suitably qualified.  God willing, he will start on 1st July and Ruth will spend several weeks training him in our systems and processes.
Faults & Foibles
Let me leave you with a quote that’s resonated with me over these last few days.  It’s from a book called “21 Servants of Sovereign Joy” by John Piper.  What a book it’s turning out to be!  He examines the lives of 21 well-known saints of old, highlighting their accomplishments, whilst not glossing over their faults and foibles!  It’s proving to be a huge encouragement to me – and I’m only on page 258 out of 814!  My only criticism is that Mr. Piper does not include Mr. Livingstone!  Anyway, here goes with a quote that should encourage you and I: These lives are “a vivid powerful testimony to the truth that God can and does use weak, sick, discouraged, beat-down, lonely, struggling saints who cry to him day and night to accomplish amazing things for his glory”.  Onwards in the fight!
PPP: Prayer & Praise Points:
Many thanks and every blessing
Steve & Ruth 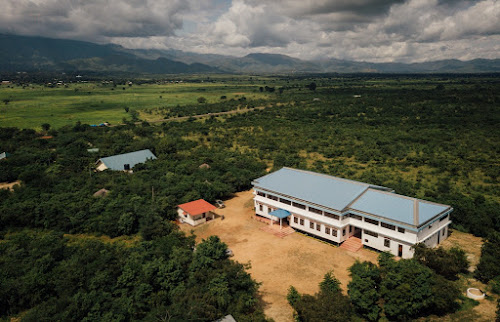 Posted by Steve and Ruth Lancaster at 18:07